Vietnam is easing its coronavirus lockdown across much of the country after reporting no new cases for a week. It has had only 268 confirmed infections and no deaths. Jonathan Head reports.

Vietnam is a one-party communist state with an efficient local administration and intrusive security apparatus, which is informed promptly of any possible infections and enforces quarantine even on entire districts to stop them from spreading. It's been unable to replicate the mass testing carried out by Germany and South Korea. Its health system is poorly resourced and would have been quickly overwhelmed by a more serious outbreak. But Vietnam has shown that political will, a well-organized state and a compliant public have been sufficient to spare the country from the worst effects of the coronavirus.

European Union leaders are expected to sign off on a huge rescue package for countries hardest hit by the coronavirus crisis agreed after a bitter debate. The Italian MEP Carlo Calenda says the Italians have been disappointed with the European Union. 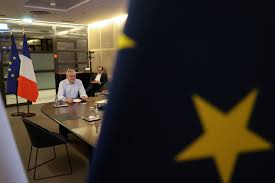 Although the ECB is supporting our debt to the quantitative easing programme, we have a problem that we feel that the reaction of the European Union has been too slowly, has been too relaxed, especially in the first phase of the coronavirus crisis when only Italy was affected. So the anti-European feeling among the population is today very high and very strong.

The German Chancellor Angela Merkel has said Germany should be prepared to pay more into the European Union's budget to help foster economic recovery amid the coronavirus pandemic. She told Germany's parliament the pandemic was still in its early stages.

No one likes to hear it, but it is the truth. We're not living in the final phase of the pandemic, but we're still at the beginning. We will have to live with this virus for a long time and the question is how we can prevent the virus from overwhelming our health system and subsequently costing the lives of countless people. This will be the central question for politics in Germany and Europe.

The cruise ship that has been Australia's biggest source of coronavirus infections is preparing to sail later today after the authorities ordered it to leave the country. The Ruby Princess has been linked to more than 600 cases and at least 21 deaths. Almost 3000 passengers were allowed to leave the vessel in Sydney without any checks for COVID-19.